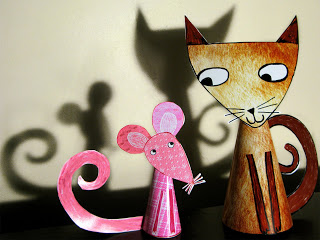 I wish I’d had this dream, but this is Colin’s, the cute and fun cat in Leigh Hodgkinson‘s book Colin and the wrong Shadow. My son picked it  up at the library and decided that reading it twice was not enough (which I guess is always a good sign). Since then (a mere 10 hours ago) we’ve probably read it another six or seven times, and I would not be surprised to hear that his father has also been solicited! I am not sure what my son prefers in this book but here is a list of the things he has appreciated and underlined as we read together:

2.the giant elephant shadow and the little pink mouse Vernon

From this list you would not know that this book is all about Colin’s search for his lost shadow, but it is. After realising that the funny feeling he has when waking up is due to his new mouse-shaped shadow, Colin tries to ignore the sniggering of other cats. But this is really hard. Finally sad and frustrated, he manages to spot his original shadow and chases it down. It turns out that Vernon, a little pink mouse, has ‘borrowed’ his shadow while he was sleeping. But Colin is not happy with this switch-swap and wants his shadow back. After a heart to heart conversation, Vernon and Colin finally come to an agreement and swap shadows again before having a lot of fun together.

While my son was curious about the interchangeable shadows and the details of the collages making up part of the illustrations, I could not refrain from admiring the various levels this story could be read at . You can look at it as a simple lost&find type of adventure, but the story is also about appearances and the way individuals perceive each other and act accordingly. The fun these two improbable companions eventually have proves everyone wrong in the end, which is a relief.  The ‘all is well that ends well’ cuppa that Colin and Vernon share was a highlight for both my children, who seem to understand instinctively that this special tea&cheese break stands for both resolution and comfort .

As for me, I loved the attention to texture, layers and details of Hodkinson’s illustrations. Colin’s soft looking fur, Vernon cracker-sofa, and the fun camembert on the back cover all added to my enjoyment. There are several other books by this author including one starring Colin again, so I suspect we will be reading more of these this summer…and you may read more about them in another post.